What I Learned This Year: Four Analyst Reflections 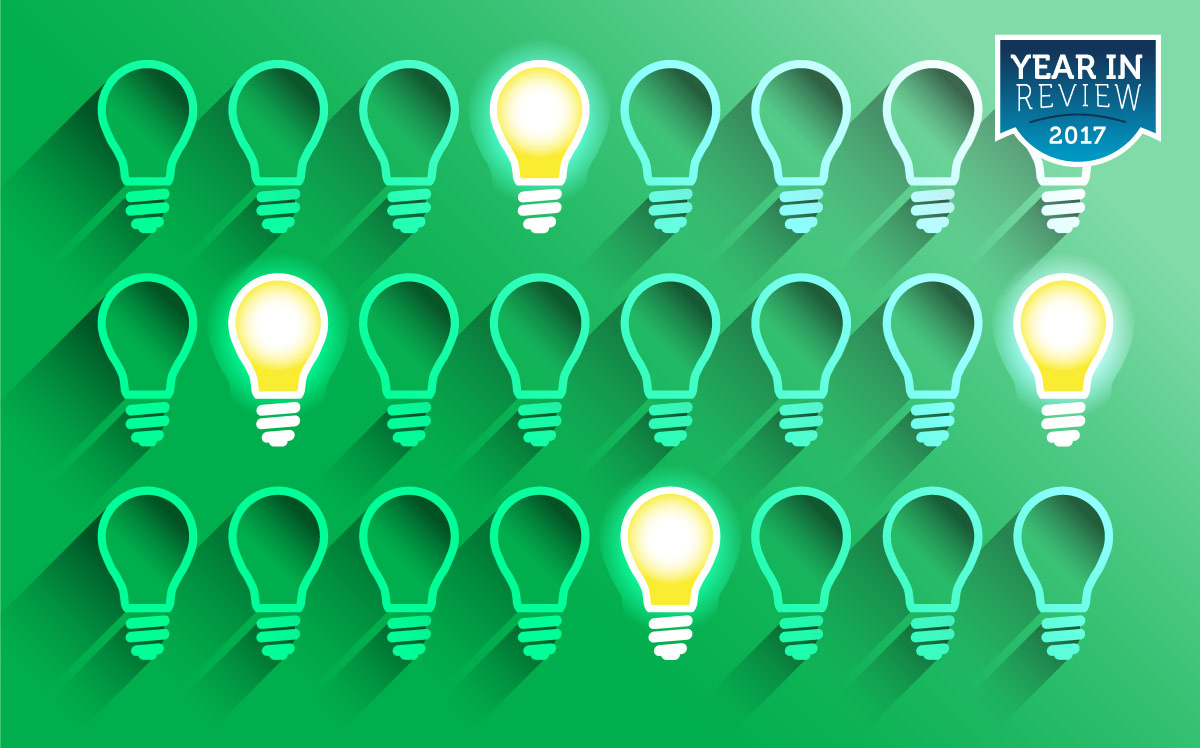 As the year comes to a close, we asked our top analysts to reflect on some critical questions impacting colleges and universities in 2017:

Is there something wrong with the undergraduate adult market? What does the newest evidence actually say about the importance of convenience to prospective adult students? How much is enrollment success about the right strategy, and how much is about sheer grit? How can schools get out of the vicious cycle—that they may not even know they are in—when trying to get up to date with technology?

Drawing on new insights from their research this past year, here is what they said.

Something is Wrong with Adult Enrollment

After hitting record highs in the aftermath of the Great Recession, several years of economic growth have led adult undergraduate enrollment to shrink to its lowest level in 12 years (Figure 1). This decline might be viewed as simply a function of the ups and downs of the business cycle, but I think something else is also is going on.

Figure 1. The Rise and Fall of U.S. Adult Undergraduate Enrollment Source: IPEDS, NSCH, BLS, U.S. Census. The 2016 and 2017 enrollment figures are estimates based on NSCH data. The unemployment data is all reported. Grey box= Great Recession.

There are more adults aged 25-44—the classic years of adult participation in higher education—in the U.S. today than there were 10 years ago. Unemployment is below 2007 levels, although this masks lower workforce participation. Most post-recession job creation has benefited the college educated, and median wages for people without a degree have shrunk significantly in real terms over the past decade.

But census data shows slowing growth in bachelor’s attainment among 25-44 year olds and indicates a smaller gap between demand and supply for bachelor’s-educated workers. So why aren’t more adults enrolling?

Many non-degree service jobs are comparatively unaffected by globalization and automation, thereby weakening one’s rationale for returning to school. Sustained media coverage of degree costs may have prompted more adults to reassess the viability of pursuing a degree. Other factors may include wider awareness of poor graduation rates, slow time-to-completion for adult learners, and, the growing array of short, low cost, and job-specific degree alternatives, such as bootcamps and “new collar” apprenticeships.

Yes, another recession will happen and adult enrollment will rebound. But schools need to face the fact that adult undergraduate enrollment may have peaked. Is this market in the midst of a big-picture re-think of who higher education is for and what it means? For schools that enroll lots of adults, there has never been a more important time to make a compelling case for undergraduate education.

A Shining a New Light on Adult Learners

Despite a sizable enrollment decline in recent years, there’s little doubt that adults over the age of 25 still represent a sizable and diverse segment of current and prospective college students. More obscure, however, has been a precise measurement of the range and diversity of how these adult learners wrestle with the prospect of returning to school.

Based on a new research design, our 2017 Adult Prospect Survey features 10 data-validated behavioral and attitudinal mindsets of prospective learners who are seeking either certificates, non-credit courses, undergraduate degrees or masters and professional degrees. These reveal a range of preferences about what and how these prospects want to learn.

While I’ve thought of adult learners as predominately seeking ways to advance their careers, these new mindsets have opened my eyes to several other essential dimensions. Based on data about their expectations, desired experiences, and preferred features, 55% of prospects in the 2017 survey are attracted by either highly immersive programs or those that offer convenience and fit with their busy lives. Others are more likely seek a balance between these two extremes.

While career motivations are present among almost all prospects, our study identifies 25% as more likely to be motivated by highly personal, and less purely economic, goals. It’s possible to see significant range and variety in program preferences and desired outcomes among four prospective undergraduate mindsets identified by the 2017 study (Figure 2). 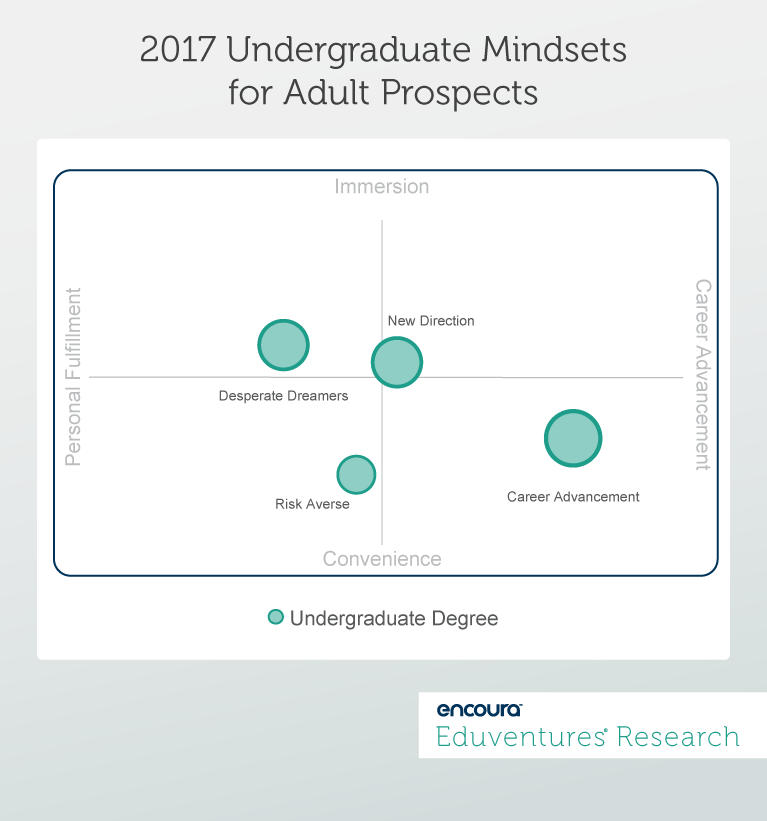 2018 promises to be an opportunity to continue our work with our institutional and technology clients as we deepen and further refine our analysis of prospective adult learners.

In 2017, we can say that higher education has been in an entrenched period of stress for almost a decade. The pressure to improve institutional performance isn’t easing up; it’s increasing. While there are many ways institutions respond to this environment, the most effective exhibit one of the most important characteristics they would expect from their own students: grit, the perseverance and passion to achieve long-term goals.

How has this grit manifested itself? Effective higher education teams realize that grit has to be an institutional value not an individual characteristic. They work passionately, deliberately, and collaboratively to refine objectives and activities that will achieve institutional goals. This can take many forms.

One example that sticks in my mind is how the University of Alabama, Birmingham (UAB) tackled student success. UAB understood two things: it needed to get its students to graduation, and that the pathways toward this goal were primarily academic. Straightforward concepts, perhaps, but easier said than done.

The university reorganized its administration of student success to create an accountability structure. It then led parallel efforts to build on first-year connections and rethink the advising ecosystem. UAB used some technology, but not a lot. Instead, thoughtful program design, testing, evaluation, and iteration—all functions requiring the institutional value of grit—are responsible for its success. As a result, UAB improved its six-year graduation rate by 17 percentage points over five years. This example captures the essence of what I saw this year. Rather than breakthrough methods or shiny new tools, institutions that do well are working on the tried-and-true levers of recruiting and student success with discipline, creativity, passion, and … grit.

Why Viewing Technology Horizontally Only Tells Part of the Story

Over the past year, our Higher Education Technology Landscape has classified over 500 products in 41 different segments, ranging from backbone systems such as enterprise content management to student success solutions such as learning management systems. We believe that this product-level, horizontal view of the higher education technology world is useful because it gives structure and clarity to the noise in the marketplace (look for an updated map in early 2018).

In our advising calls with institutions and vendors over the course of this year, however, we learned that a sole focus on this view can be misleading, suggesting that the only differences between products are their segment classification and specific features. Therefore, we decided to add another lens: “building blocks,” the critical drivers of student success—for example—such as persistence, academic achievement, or career advancement.

I’ve found that viewing the marketplace vertically through this lens enables institutions to better understand how specific products best align with their needs—such as personalization, instructional design, and learner management—and helps vendors understand how best to develop, position, and message their products to institutions. We look forward to sharing more thoughts on this over the course of 2018.